History and Description of the Building 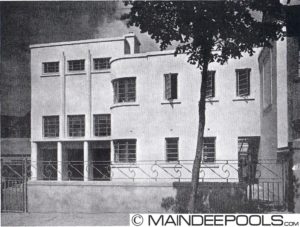 The Markets and Baths Committee considered the provision of a Swimming Baths in Maindee in the year 1933. A number of sites were inspected and finally a site between Victoria Avenue and Albert Avenue was selected as eminently suitable being in close proximity to the Maindee Shopping Centre, and of easy access to the bus route from the centre of the city and from Chepstow. Powers to purchase the site were included in Newport Corporation Act, 1934.

In March 1937, tenders were invited by public advertisement and Messrs. E. C. Jordan & Son were awarded the building contract, Messrs. Caldwells Limited, the heating contractor and Messrs. Royles Limited, the filtration contract. The site used to have two entrances, the principal one being on Victoria Avenue, whilst the secondary one is from Albert Avenue and used to give access to the Learners and Children’s Pool. 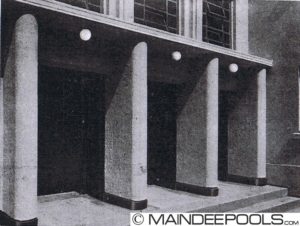 The main entrance on Victoria Avenue leads into a spacious entrance hall with central Pay Box, where tickets used to be issued for admission, both for swimmers and spectators, including tickets for bath robes, bathing costumes and towels. After obtaining tickets bathers descend a short, wide staircase to the dressing halls on the lower ground floor, whilst spectators proceed up the main staircase to the Upper Hall on the first floor.

The upper hall gave access to Café and Café balcony and thence to the Gala Stands. Adjoining the hall, the Slipper Baths Suite is placed a comfortable Club room for the use of Swimming Clubs provided. A feature of the design is that spectators approaching their seats obtain a clear and uninterrupted view of all pool activities without the necessity of walking along the poolside, which is restricted to bathers only. 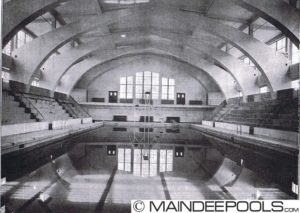 The main pool was 100 feet long by 42 feet wide, having a maximum depth of 10 feet. The bath floor gradually rises from this point to a depth of 4 feet at the shallow end and 8 feet at the deep end. The diving stage had diving boards at heights of five metres, three, and one metre above water level. Comfortable seating accommodated for 428 spectators was provided on the Gala Stands, whilst an additional 300 people was accommodated with chair seating around the balcony, and a further 300 standing. 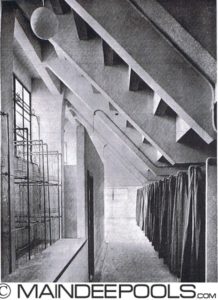 Separate Dressing Halls were planned on the lower ground floor under the Gala Stands for box sexes, with short staircases lead directly to the pool side. There was 32 dressing cubicles for men and 32 for women. The partitions and backs of boxes are in terrazzo.

On arrival bathers proceed to counters where the tickets previously obtained from Pay Box are handed to an Attendant, who provides them with a combined clothes hanger and basket which is taken into any vacant dressing cubicle.

When ready for bathing, the basket of clothes is handed to the Attendant who in return provides the bather with a numbered disc. By this method, it was possible to deal with a much larger number of bathers than by providing a cubicle for each bather. On leaving the Dressing Halls for the Swimming Pool, bathers had to pass through foot baths and adjoining these foot baths and showers. 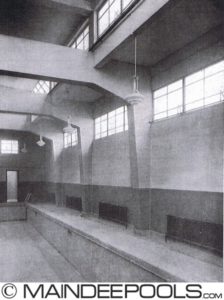 Across the Albert Avenue end of the site is a smaller pool which was 60 feet long by 25 feet wide, having a maximum depth of four feet. This pool was encouraged for non-swimmers from as early an age as possible to provide for school children, and enable swimming instructions to be given to persons of all ages. The baths were fitted with a filtration house and plant which had clerestory windows so that the whole process of filtration can be observed by bathers, which it was felt that this would have a sound psychological value.

The baths were also fitted with a purification plant, which was driven by two motor driven Centrifugal Pumps at the rate of 65,000 gallons per hour. The plant was supplied and fixed by Messrs. Royles Limited, Irlam, Near Manchester.

The baths were fitted with heating and domestic hot water supplies. The water supply was taken from the city’s mains, which feed a special storage tank containing 2,200 gallons. All the pipes were easily accessible, being carried through a special duct-was in the basement, which also provide access to the iron drainage system. The building was equipped with electric lighting, which was directed up on to the ceiling, the actual source of light not being seen. 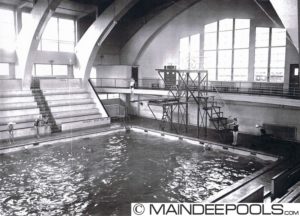 The main pool also had twenty underwater lighting, which was designed that special colour effects could be obtained. At the rear of the main entrance hall was the Staff Suite, this comprises the General Baths Superintendent’s and Clerks separate offices. The house attached to the baths used to be the General Baths Superintendent’s house which was a modern, three-bed-room parlour.

The construction of the building included the use of fire-resisting, reinforced concrete. All the windows were of steel and was operated by hand and electric opening gear. A special coloured cement was used for both the external and internal walls and ceiling finishes of the whole building. 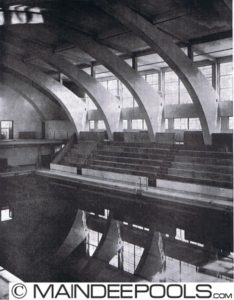 Great care was taken in the provision of equipment for the efficient control and administration of the baths. An up-to-dare internal telephone system was installed to enable to Superintendent to have direct communication to all parts of the building.

The tenders for the work was as follows; 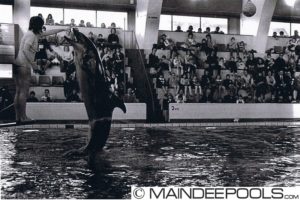 Read more about the Maindee Dolphins. 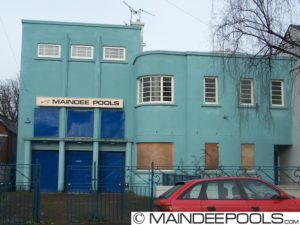 The doors of Maindee Baths were firmly closed on December 23, 2005 and the pool, which gave so much fun for thousands of swimmers has now been drained. Newport City Council closed down the building because the amount of money needed to upgrade it to the 21st century the council thought it was not worth it. All the activities that used to take place in Maindee was a transfer of Newport’s International Sports Village, close to the Velodrome and athletics stadium at Spytty. 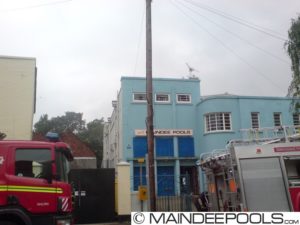 In 2007 Maindee Baths was hit by arsonist twice in one day, when council was told that people are getting into building they stated that they can’t do anything to stop the 21st century kids. 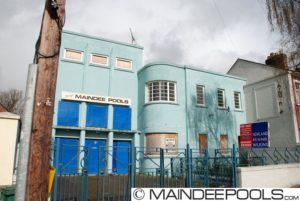 In 2008, Newport City Council decided to put Maindee Pools up for sale, with the guide price of £100,000. It was later sold for £76,000 by a Newport man who wanted a family home. He later then put Maindee Pools back up for sale without the house attached and was brought by the Gassor family in £56,000.

You can login to all our network of websites with one username.